Beyond the local Galle Region but still within an easy day’s travel of Sergeant House are many outstanding nature areas and national parks. Sinharaja Forest Reserve is one of the world’s biodiversity hot spots and was declared a UNESCO world heritage site in 1988. The small rainforest has many endemic species of trees, insects, amphibians, reptiles, birds and mammals. The wildlife includes 6 species of chameleons. One of the larger species changes from brilliant orange to emerald green as it moves through different coloured vegetation types. Knowledgeable guides can show you through the forest following its pristine streams and waterfalls and revealing some of its hidden jewels.

Another memorable day trip from Sergeant House can be organised to Uda Walawe National Park. The national park consists of open grasslands traversed by many streams, the Walawe River and some surrounding mountainous areas. It also borders a large reservoir. The Park is an important habitat for Sri Lankan elephants (with a permanent herd of approximately 400), water birds, crocodiles and other mammals and reptiles. The elephants can often be seen in large groups, close up, wallowing in mud pools by the road or foraging in the grassland. The calves are cushioned by the adult group and make shy appearances. It is a majestic sight to see so many elephants in the wild exhibiting their natural behaviour. Other animals which are commonly sighted are the: langur monkeys, spotted deer, water buffalo, toque macaques and peacocks. 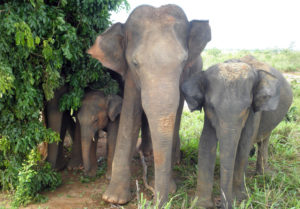 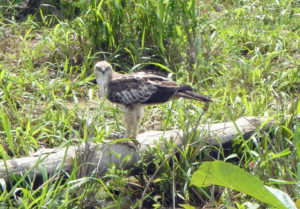